In this blog, we try to answer the question: What is the difference between decoding, encoding, and transcoding?  Where do I use what?

First of all, each of these terms include the word ‘coding’. Any digital medium, no matter if it contains image, video, or sound relates to that. When digitizing an analog signal (light or sound) digital coding has to be applied.

At the beginning of the chain there is always the creation of a digital signal, called encoding. For example, this happens when capturing an image or video signal within your digital camera / your smartphone, and also when capturing sound via a microphone to a digital device like a digital audio recorder or a smartphone. For playback, the previously recorded digital signal is being decoded. The processes of encoding and decoding are handled by a so-called codec – the term is a merge of the terms coding & decoding.

For being able to create and play complex digital signals in high quality, digital data within the codec in question are being compressed via algorithms. Depending on the used codec, signal quality can differ.

Nero software applications make use of software codecs but can also utilize system based hardware codecs. For example, the latter comes into place when exporting (encoding) AVC video via compatible graphics card chipsets in Nero Video or when transcoding video files in Nero Recode.

Transcoding comes in place when converting one digital media format to another. Typical examples are converting audio WAV files to MP3 files, or ripping an audio CD to single AAC for MP3 files. Also ripping video discs or converting images – e.g. TIFF to JPG – rely on the process of transcoding.

Which Nero Application does what? 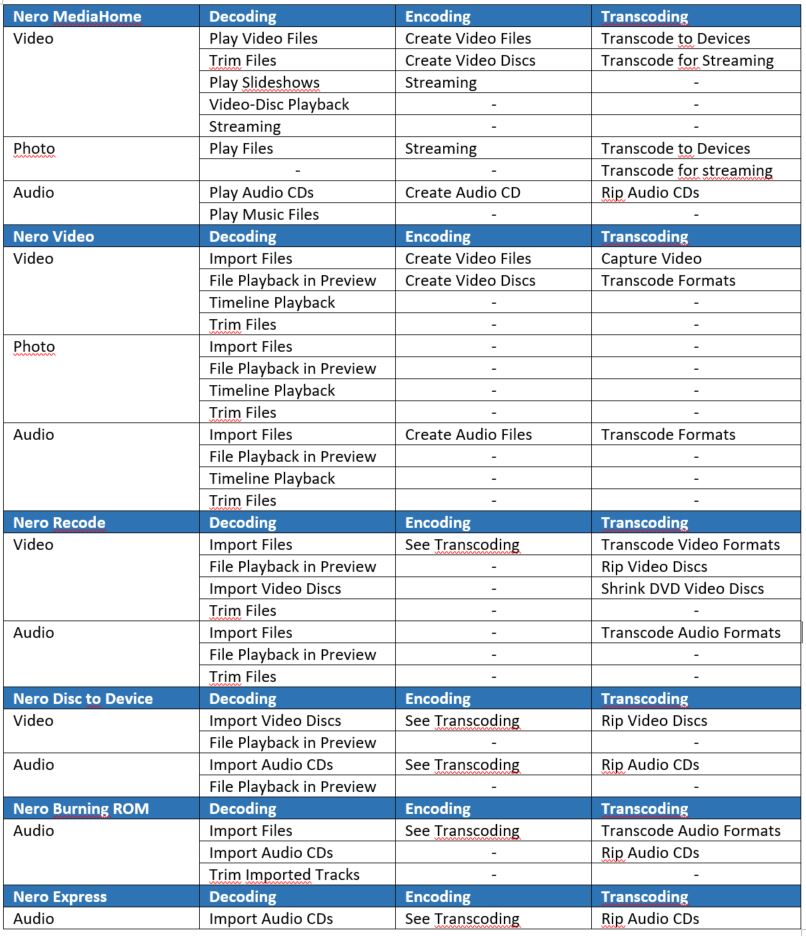