Quick test only tests the disk sequential read and write speed to let you know the difference of actual disk speed compared to the nominal speed in the specification and the performance when copying large files from one place to another.

3.2.1.2 – Added the Metaverse test to benchmark the 3D rendering frame rate of the GPU

What is the Metaverse?

The metaverse is a shared virtual 3D world, or worlds, that are interactive, immersive, and collaborative. Just as the physical universe is a collection of worlds that are connected in space, the metaverse can be thought of as a bunch of worlds, too. People call metaverse the next iteration of the internet—one that we relate to not just by photos and videos and text, but by touch and interaction between elements rendered in Virtual or Augmented Reality that emulate real-world situations. If social media has been an important communication tool, then the “metaverse” could be the next frontier of connectivity and interaction. 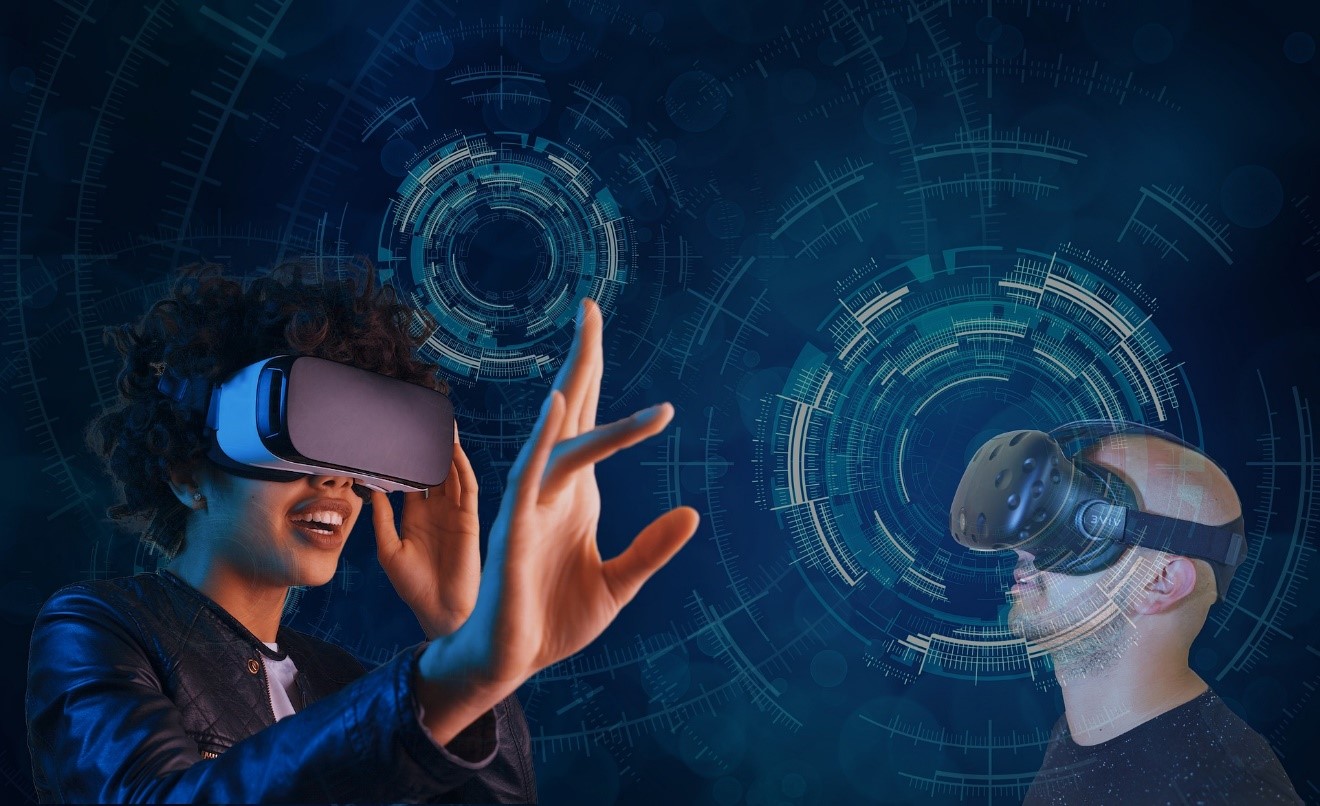 Outstanding 3D real-time rendering capabilities will bring you a more immersive digital experience and bring us one step closer to the metaverse. 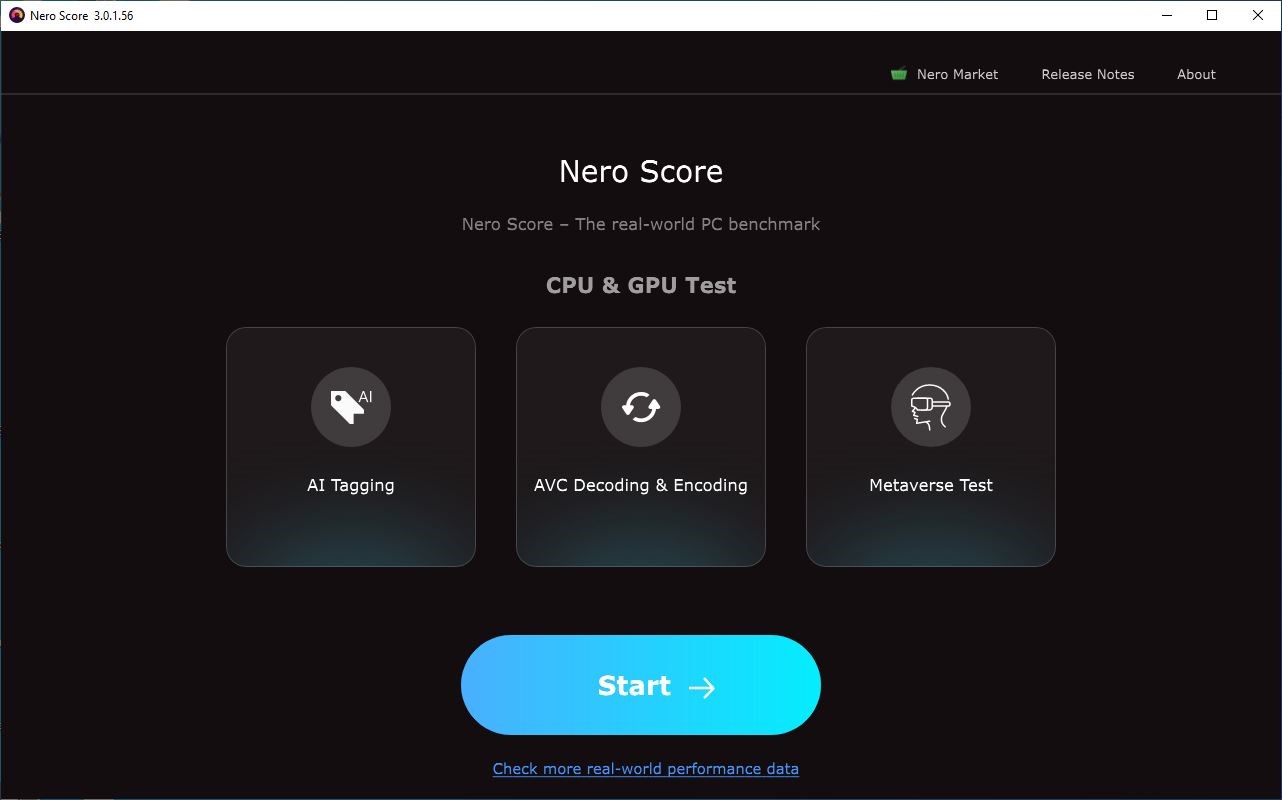 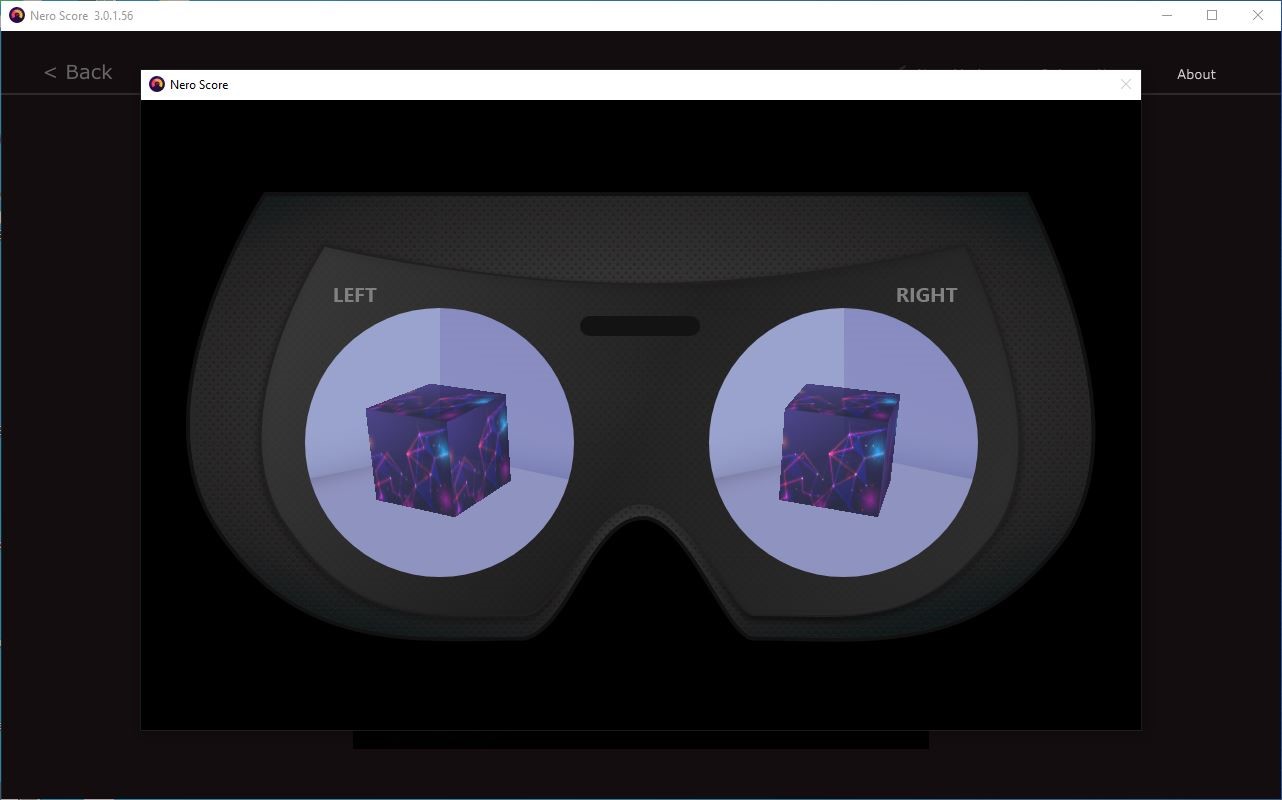 The GPU metaverse benchmark measures how many frames per second a 3D asset can be rendered on a given GPU. The results of this test will allow you to compare the scores of different GPUs in this domain. You can also compare the different performances that may exist between the AVC solution and the Metaverse solution on the same graphics card.

With ‘Nero TuneItUp’ you will analyze and fix common PC problems, and optimize system settings. When you launch ‘Nero TuneItUp’, you can click on the ‘check‘ button to scan your system. When the scanning is completed, you can then click on ‘Show & Fix‘ to resolve the issues found. 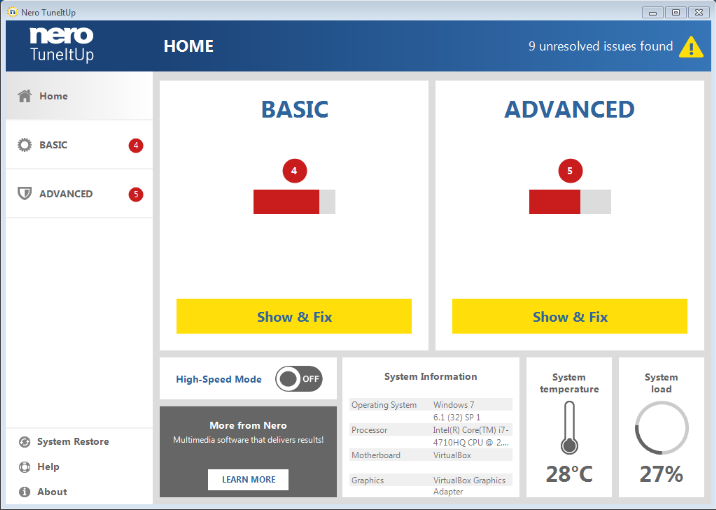 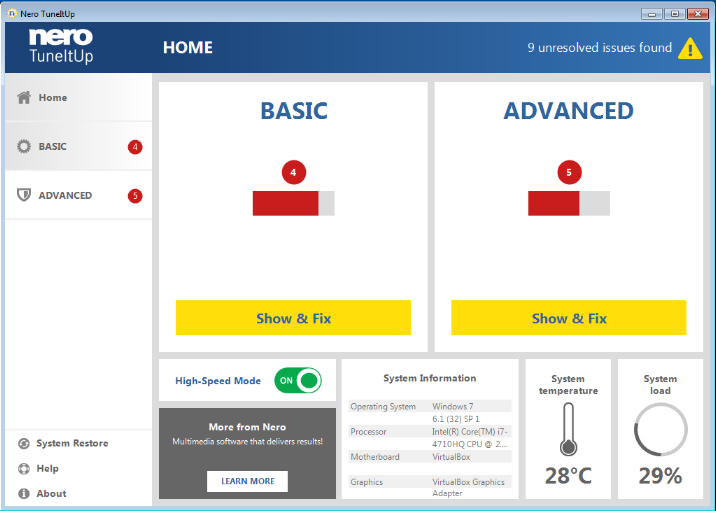 The free version lets you scan and solve all items in the ‘BASIC’ category. 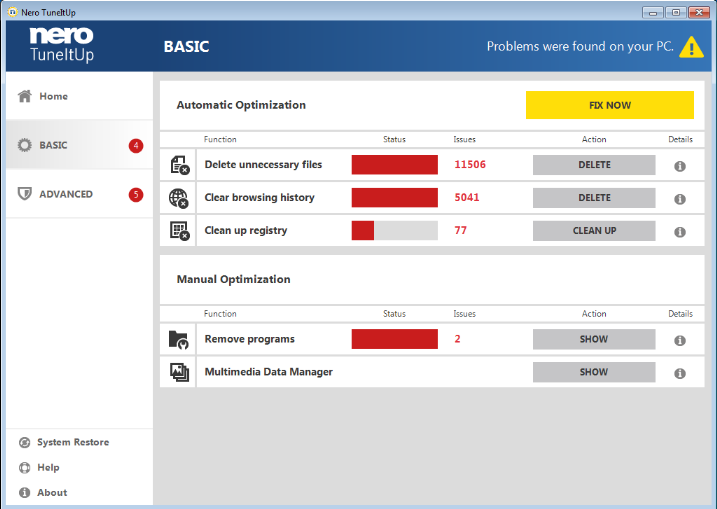 The paid version ‘Nero TuneItUp PRO’ enables additional ‘Pro-Features‘ which are locked in the free version. These Pro-Features include faster system start-up, faster web-browsing, automatic optimization of Windows services, scanning for outdated drivers and software with direct update downloads from a central database, secure deletion of files, as well as a power-saving mode for longer battery life. 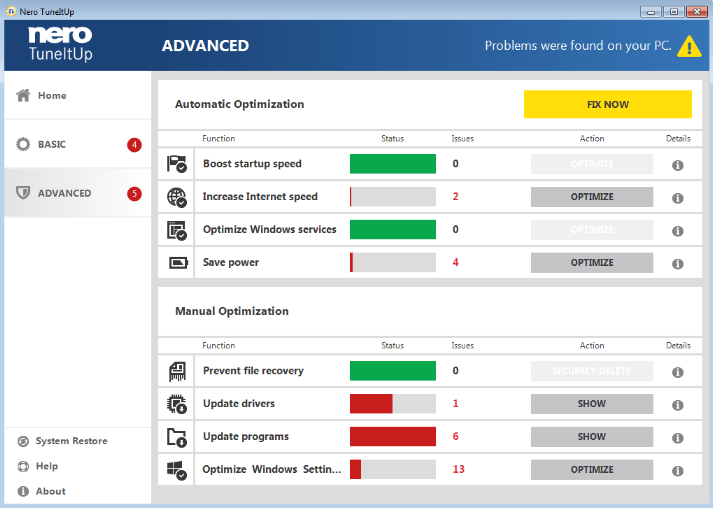 If you are working on a Full HD Project with many tracks and a number of video effects applied your system may not be performant enough to play your preview in realtime. Also 4K projects can suffer from perfomance in preview.

For such cases ‘Nero Video’ has a special function called ‘Background Rendering‘. With this function enabled Nero Video will render your project in the background whenever your project is idle so that you can even watch complex projects in realtime. 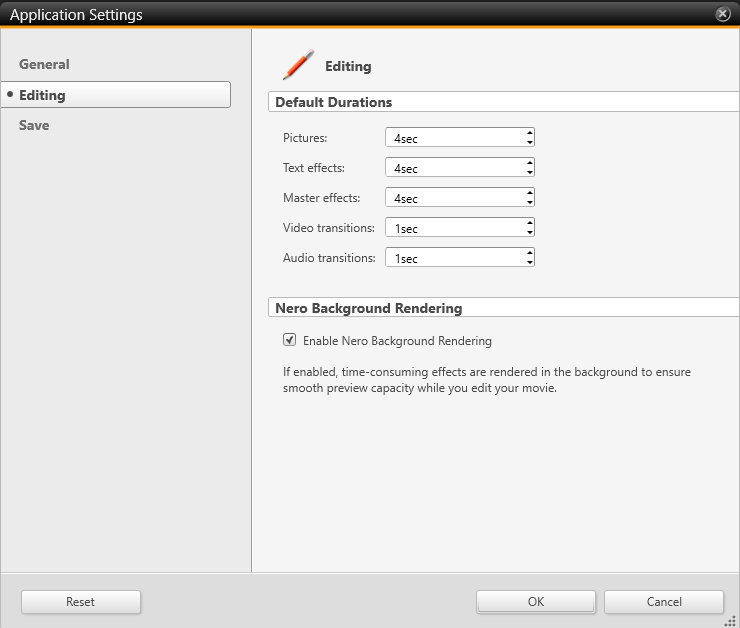 ‘Nero Video’ will show a percentage indication. When this is finished (100%) ‘Nero Video’ is ready for a realtime preview.

If you prefer doing video editing on a laptop it is very useful to have a second larger video monitor for your project preview. This way you also have the advantage of enlarging the project workspace on your laptop.

Make sure your second monitor is attached. In Nero Video click on the dual monitor button underneath the preview screen. Now your preview is shown on the second monitor simulateneaously.

For adjusting the preview quality click on the respective button in the left hand side of navigation bar underneath the preview screen and make use of the quality slider. Select ‘Best Quality’ most right for Full HD preview.

If your system lacks perfomance you can also set the slider more to the left hand side and reduce resolution in favor of having more real time performance.

Finally you can adapt the layout of your main screen to gain more space for your project work. 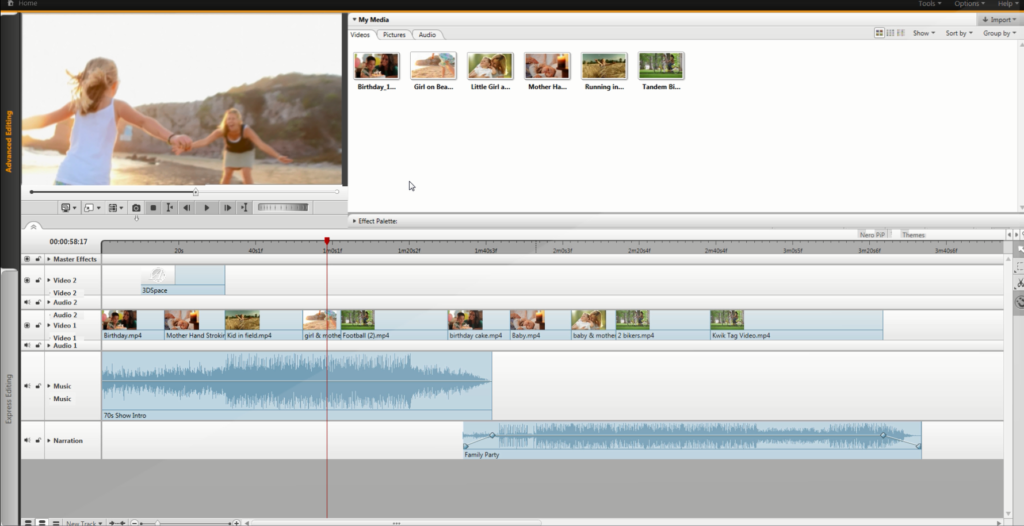 Your layout will be auto saved with your project and loaded automatically next time you start Nero Video.

Check out the video tutorial